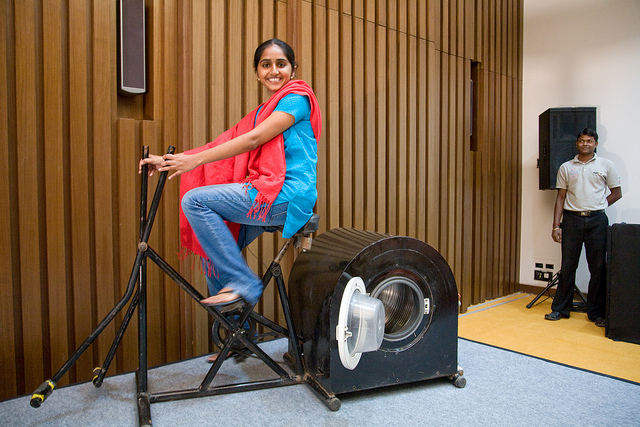 Remy Jose decided to skip ‘thinking outside the box’ and challenged the box itself.

It all happened because Remya’s mother fell ill during her 10th standard exams and her father was undergoing cancer treatment. She had to change three buses while going to and coming from school and spend about two hours each way. As there was no washing machine at home, the chore of doing the laundry fell to her and her twin sister.

So instead of just wishing futilely for a washing machine, she decided to try her hand at making one during the vacations.

After watching the video, read below to see what her parents said.  You WILL NOT believe it!   By the way, her father is a high school teacher and her mother is the headmistress of an Upper primary school.

Her inspiration and constant supporter has been her father, a high school Hindi teacher – but her father confesses that when she first approached him with the idea of a manual washing machine, he expressed his doubts about it. He even told her that girls get married and go to a new house where there might be no washing machine, so it is better to learn to wash clothes by hand.

Her mother recalls that she was never keen on he daughter ‘wasting’ her time on any of these pursuits and used to tell her to concentrate on her studies. Now she affectionately commends her daughter’s achievements and gives all due credit to her husband.

This ‘realistic’ attitude is how we are teaching out children today.  We are suppressing the creativity of our children in favor of ‘realistic’ pursuits.

I wish I could say I am different, but just the other day I caught myself saying to my daughter as she was coloring, “Honey, trees leaves are green, not pink.”  And then she pointed to a landscape book of the Appalachian mountains and sure enough it seemed like every color of leaf was in it.

My story is to demonstrate how easy it is, in very small ways, to unintentionally diminish our children’s creativity.  Luckily, my daughter was able to prove to herself and me that I was wrong!

Creativity is not lost, it is simply buried.  You are far more creative than you give yourself credit for as Eric Wahl says in Unthink:

“You’ve been taught to think logically, but not daringly, concretely or instinctively.  You’ve all but forgotten the artistic tools with which you were born.”

Eric goes on to say,

“Once your remember – once you learn to unthink how you live and work – everything will change.”

This is what Remya was facing – being trained to think a certain way.  She had the creative mindset, the courage, to hold onto her creativity and in the end, enlisted her parents as well.  That is a beautiful thing.

Like Remya, take some of your spare time and rediscover your creativity – UNTHINK your training and find that beauty that exists in you.

#challenge the box itself, #think outside the box